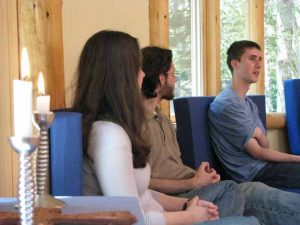 The Gnostic Movement was a non-profit spiritual organization in the Gnostic tradition that was active from 1999 to 2012. It ran courses both online and in study centers that were written by the author Belzebuub. These courses covered subject matter such as dreams, astral travel, self-knowledge, and esoteric wisdom, with a focus on helping participants gain practical experience of spiritual topics.

All courses run by The Gnostic Movement were facilitated by trained volunteers and more than ninety thousand people from over one hundred countries around the world participated in the courses, retreats, and other activities that it ran. There were study groups and centers in Australia, Canada, the United States, London, Edinburgh, and more.

The Gnostic Movement was a spiritual school that was open to anyone from the public to attend, no matter what background or spiritual orientation they came from. Because the courses authored by Belzebuub and taught in The Gnostic Movement were highly practical, many participants had frequent experiences both in their daily lives and beyond their body. Such frequent and often profound experiences created a lively atmosphere in The Gnostic Movement that inspired course facilitators and participants alike, leading to many in-depth discussions about spiritual topics and experiences not just during guided information sessions and practices, but on walks, in social gatherings in person and online, and over a piece of cake and cup of tea in the center cafes.

Although The Gnostic Movement closed in 2011/2012, many long-lasting friendships and happy memories were formed during its period of activity. These experiences have stood the test of time, and in many cases become stronger to this day. Experiences gained through participation in The Gnostic Movement were often life-changing, helping attendees to learn more about themselves and the state of the world, find or rediscover purpose, overcome difficulties in their lives, and gain spiritual experiences that many expressed they never knew or thought would be possible.

Sadly, a small number of ex-participants who disagreed ideologically with what was being taught—approximately one-hundredth of a percent (or 0.01 percent)—banded together to try and overthrow The Gnostic Movement, choosing to portray their experience in a false and negative light and twisting and manipulating the truth to make Belzebuub and The Gnostic Movement seem harmful when in reality the complete opposite is true. Thousands of people’s lives were helped for the better through what they learned in The Gnostic Movement, and over one hundred witnesses came forward to reveal the falsity of the claims being made. Some of those people have also shared experiences of their time in The Gnostic Movement with this site, where they have been published on the blog under People’s Experiences.

On this website you will find an overview of The Gnostic Movement and a statement refuting the small number of false and negative accusations about Belzebuub which are online. You will also find experience articles from attendees with pictures showing firsthand what The Gnostic Movement was really like, with more articles and images being added as they become available. Another rebuttal of false claims made about Belzebuub can be found here.